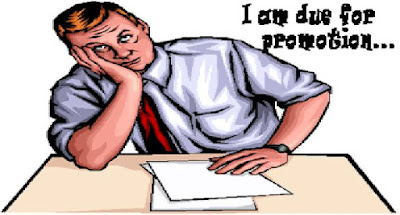 Here Is Why You Are Not Getting Promoted.
THE PROBLEM: You don’t ask your boss why you aren’t getting promoted.
After not taking responsibility, Cenedella said the second biggest reason keeping workers back from a promotion is not talking to their boss enough. He said when he asks unhappy employees why their bosses think they haven’t been promoted, 80 to 90% haven’t talked to them about it.


“A lot of times you overlook it because that boss-relationship feels so fraught with tension and with nerves,” Cenedella said. Most bosses, however, wish employees would ask them more often what they can do to improve.

SOLUTION: Start having weekly, in-person one-on-one conversations with your boss. The best practical solution to solve a lack of communication with your boss is to set up weekly one-on-one sessions. It’s hard to ask your boss to step away from work to talk about your career, but if the two of you have a regular time set up already, the conversation comes about more organically.

“Getting that relationship to be comfortable is super important to your career,” Cenedella said.

From there, Cenedella says to ask for which improvements she thinks you should be making. You can tell your boss point blank that you want to get promoted in a year, and ask for the steps to get there.