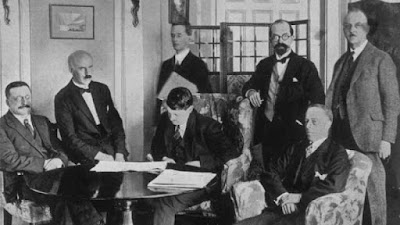 The Irish Free State, comprising four-fifths of Ireland, is declared, ending a five-year Irish struggle for independence from Britain. Like other autonomous nations of the former British Empire, Ireland was to remain part of the British Commonwealth, symbolically subject to the king. The Irish Free State later severed ties with Britain and was renamed Eire, and is now called the Republic of Ireland.


English rule over the island of Ireland dates back to the 12th century, and Queen Elizabeth I of England encouraged the large-scale immigration of Scottish Protestants in the 16th century. During ensuing centuries, a series of rebellions by Irish Catholics were put down as the Anglo-Irish minority extended their domination over the Catholic majority. Under absentee landlords, the Irish population was reduced to a subsistence diet based on potatoes, and when a potato blight struck the country in the 1840s, one million people starved to death while nearly two million more fled to the United States.
A movement for Irish home rule gained momentum in the late 19th century, and in 1916 Irish nationalists launched the Easter Rising against British rule in Dublin. The rebellion was crushed, but widespread agitation for independence continued. In 1919, the Irish Republican Army (IRA) launched a widespread and effective guerrilla campaign against British forces. In 1921, a cease-fire was declared, and in January 1922 a faction of Irish nationalists signed a peace treaty with Britain, calling for the partition of Ireland, with the south becoming autonomous and the six northern counties of the island remaining in the United Kingdom.
Civil war broke out even before the declaration of the Irish Free State on December 6, 1922, and ended with the victory of the Irish Free State over the Irish Republican forces in 1923. A constitution adopted by the Irish people in 1937 declared Ireland to be “a sovereign, independent, democratic state,” and the Irish Free State was renamed Eire. Eire remained neutral during World War II, and in 1949 the Republic of Ireland Act severed the last remaining link with the Commonwealth.
Conflicts persisted over Northern Ireland, however, and the IRA, outlawed in the south, went underground to try to regain the northern counties still ruled by Britain. Violence between Protestants and Catholics in Northern Ireland escalated in the early 1970s, and to date the fighting has claimed more than 3,000 lives.