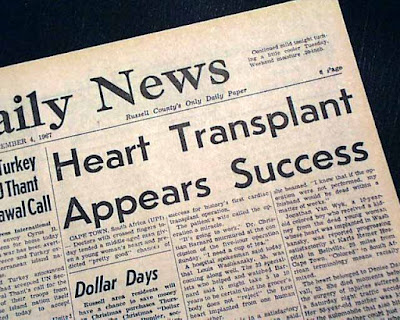 On December 3, 1967, 53-year-old Lewis Washkansky receives the first human heart transplant at Groote Schuur Hospital in Cape Town, South Africa.
Washkansky, a South African grocer dying from chronic heart disease, received the transplant from Denise Darvall, a 25-year-old woman who was fatally injured in a car accident. Surgeon Christiaan Barnard, who trained at the University of Cape Town and in the United States, performed the revolutionary medical operation.
The technique Barnard employed had been initially developed by a group of American researchers in the 1950s. American surgeon Norman Shumway achieved the first successful heart transplant, in a dog, at Stanford University in California in 1958.

After Washkansky’s surgery, he was given drugs to suppress his immune system and keep his body from rejecting the heart. These drugs also left him susceptible to sickness, however, and 18 days later he died from double pneumonia. Despite the setback, Washkansky’s new heart had functioned normally until his death.
In the 1970s, the development of better anti-rejection drugs made transplantation more viable. Dr. Barnard continued to perform heart transplant operations, and by the late 1970s many of his patients were living up to five years with their new hearts. Successful heart transplant surgery continues to be performed today, but finding appropriate donors is extremely difficult.