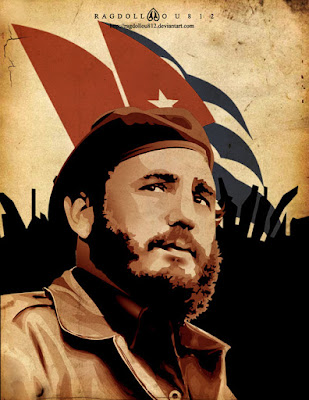 
Castro declares himself a Marxist-Leninist.

Following a year of severely strained relations between the United States and Cuba, Cuban leader Fidel Castroopenly declares that he is a Marxist-Leninist. The announcement sealed the bitter Cold War animosity between the two nations.
Castro came to power in 1959 after leading a successful revolution against the dictatorial regime of Fulgencio Batista. Almost from the start, the United States worried that Castro was too leftist in his politics.
He implemented agrarian reform, expropriated foreign oil company holdings, and eventually seized all foreign-owned property in Cuba. He also established close diplomatic relations with the Soviet Union, and the Russians were soon providing economic and military aid. By January 1961, the United States had severed diplomatic relations with Cuba. In April, the ill-fated Bay of Pigs invasion took place, wherein hundreds of rebels, armed and trained by the United States, attempted a landing in Cuba with the intent of overthrowing the Castro government. The attack ended in a dismal military defeat for the rebels and an embarrassing diplomatic setback for the United States.

In December 1961, Castro made clear what most U.S. officials already believed. In a televised address on December 2, Castro declared, “I am a Marxist-Leninist and shall be one until the end of my life.” He went on to state that, “Marxism or scientific socialism has become the revolutionary movement of the working class.” He also noted that communism would be the dominant force in Cuban politics: “There cannot be three or four movements.” Some questioned Castro’s dedication to the communist cause, believing that his announcement was simply a stunt to get more Soviet assistance. Castro, however, never deviated from his declared principles, and went on to become one of the world’s longest-ruling heads of state. In late July 2006, an unwell Fidel Castro temporarily ceded power to his younger brother Raul. Fidel Castro officially stepped down in February 2008. Castro died on November 25, 2016, at 90.