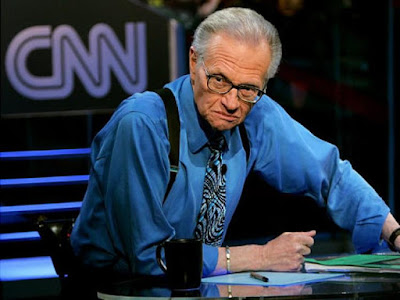 On this day in 2010, Larry King, the iconic, suspenders-sporting host of TV talk show “Larry King Live,” signs off after 25 years on the air. The 77-year-old King had hosted the hour-long CNN program, featuring interviews with movies stars, world leaders, politicians, musicians and other newsmakers, since June 1985. The farewell broadcast of “Larry King Live” included appearances by Ryan Seacrest, Regis Philbin, Katie Couric, Donald Trump, former president Bill Clinton (via satellite) and President Barack Obama (in a pre-recorded video), among others. Toward the end of the program, Tony Bennett serenaded King, who had become a TV institution, along with his wife and two young sons.


Larry King, who was born Lawrence Zeiger in Brooklyn, New York, in 1933, began his career as a disc jockey and sports announcer for a radio station in Miami Beach, Florida, in 1957. During the 1960s and 1970s, he worked in Miami as a radio and TV host and newspaper columnist before getting his own nationally syndicated radio program in 1978. In June 1985, King joined CNN, the cable news channel founded by Ted Turner in 1980. “Larry King Live,” which anchored CNN’s prime-time lineup, originated from Washington, D.C., before moving to Los Angeles in the 1990s.
The first guest on “Larry King Live” was Mario Cuomo, the governor of New York. The program went on to receive big ratings boosts when billionaire Ross Perot appeared as a guest in 1992 and announced his intention to run as an independent candidate for the U.S. presidency, and in 1993 when Vice President Al Gore and Perot came on to debate the North American Free Trade Agreement (NAFTA). That edition of “Larry King Live” was the highest-rated in cable history for more than a decade.
Over the course of 25 years, King, who became known for his straightforward, nonconfrontational interview style, consistently landed big-name guests, ranging from Marlon Brando (who famously kissed King on the lips) to Vladimir Putin to Lady Gaga. From a set featuring a color-dotted map of the world on a dark background, King often took call-in, and later email, viewer questions for his interview subjects. He has said that in order to be fresh and learn from his guests, he didn’t prepare extensively for interviews. This approach could occasionally backfire and make King seem out of touch, as in 2007, when he asked Jerry Seinfeld if his sitcom had been cancelled or if he had left voluntarily. A surprised Seinfeld, who had famously exited his show of his own accord, said to King, “Do you know who I am?”
In June 2009, King announced plans to end his show. At the time, “Larry King Live” had fallen into third place in the ratings behind political programs hosted by Sean Hannity of Fox News and Rachel Maddow of MSNBC. By the time “Larry King Live” went off the air in December 2010, the legendary host had conducted some 50,000 interviews, by his account, during his more than 50-year career in radio and television.