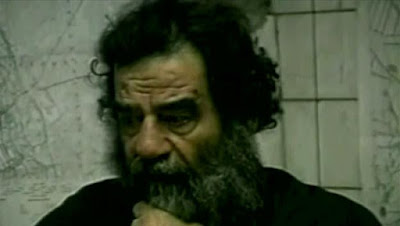 After spending nine months on the run, former Iraqi dictator Saddam Hussein is captured on this day in 2003. Saddam’s downfall began on March 20, 2003, when the United States led an invasion force into Iraq to topple his government, which had controlled the country for more than 20 years.
Saddam Hussein was born into a poor family in Tikrit, 100 miles outside of Baghdad, in 1937. After moving to Baghdad as a teenager, Saddam joined the now-infamous Baath party, which he would later lead.
He participated in several coup attempts, finally helping to install his cousin as dictator of Iraq in July 1968. Saddam took over for his cousin 11 years later. During his 24 years in office, Saddam’s secret police, charged with protecting his power, terrorized the public, ignoring the human rights of the nation’s citizens. While many of his people faced poverty, he lived in incredible luxury, building more than 20 lavish palaces throughout the country. Obsessed with security, he is said to have moved among them often, always sleeping in secret locations.

In the early 1980s, Saddam involved his country in an eight-year war with Iran, which is estimated to have taken more than a million lives on both sides. He is alleged to have used nerve agents and mustard gas on Iranian soldiers during the conflict, as well as chemical weapons on Iraq’s own Kurdish population in northern Iraq in 1988. After he invaded Kuwait in 1990, a U.S.-led coalition invaded Iraq in 1991, forcing the dictator’s army to leave its smaller neighbor, but failing to remove Saddam from power. Throughout the 1990s, Saddam faced both U.N. economic sanctions and air strikes aimed at crippling his ability to produce chemical, biological, and nuclear weapons. With Iraq continuing to face allegations of illegal oil sales and weapons-building, the United States again invaded the country in March 2003, this time with the expressed purpose of ousting Saddam and his regime.
Despite proclaiming in early March 2003 that, “it is without doubt that the faithful will be victorious against aggression,” Saddam went into hiding soon after the American invasion, speaking to his people only through an occasional audiotape, and his government soon fell. After declaring Saddam the most important of a list of his regime’s 55 most-wanted members, the United States began an intense search for the former leader and his closest advisors. On July 22, 2003, Saddam’s sons, Uday and Qusay, who many believe he was grooming to one day fill his shoes, were killed when U.S. soldiers raided a villa in which they were staying in the northern Iraqi city of Mosul.
Five months later, on December 13, 2003, U.S. soldiers found Saddam Hussein hiding in a six-to-eight-foot deep hole, nine miles outside his hometown of Tikrit. The man once obsessed with hygiene was found to be unkempt, with a bushy beard and matted hair. He did not resist and was uninjured during the arrest. A soldier at the scene described him as “a man resigned to his fate.”
Saddam is now in Iraqi custody with U.S. security and faces trial in front of a special tribunal on several criminal cases pending against him. The first began in October 2005. On November 5 of the next year, he was found guilty of crimes against humanity and sentenced to death by hanging. After an unsuccessful appeal, he was executed on December 30, 2006. Despite a prolonged search, weapons of mass destruction were never found in Iraq.