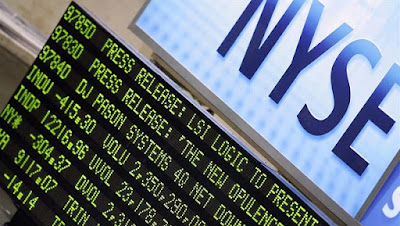 On this day in 1867, the first stock ticker is unveiled in New York City. The advent of the ticker ultimately revolutionized the stock market by making up-to-the-minute prices available to investors around the country. Prior to this development, information from the New York Stock Exchange, which has been around since 1792, traveled by mail or messenger.


The ticker was the brainchild of Edward Calahan, who configured a telegraph machine to print stock quotes on streams of paper tape (the same paper tape later used in ticker-tape parades). The ticker, which caught on quickly with investors, got its name from the sound its type wheel made.
Calahan worked for the Gold & Stock Telegraph Company, which rented its tickers to brokerage houses and regional exchanges for a fee and then transmitted the latest gold and stock prices to all its machines at the same time. In 1869, Thomas Edison, a former telegraph operator, patented an improved, easier-to-use version of Calahan’s ticker. Edison’s ticker was his first lucrative invention and, through the manufacture and sale of stock tickers and other telegraphic devices, he made enough money to open his own lab in Menlo Park, New Jersey, where he developed the light bulb and phonograph, among other transformative inventions.
The last mechanical stock ticker debuted in 1960 and was eventually replaced by computerized tickers with electronic displays. A ticker shows a stock’s symbol, how many shares have traded that day and the price per share. It also tells how much the price has changed from the previous day’s closing price and whether it’s an up or down change. A common misconception is that there is one ticker used by everyone. In fact, private data companies run a variety of tickers; each provides information about a select mix of stocks.