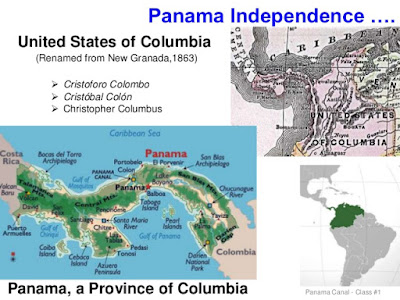 With the support of the U.S. government, Panama issues a declaration of independence from Colombia. The revolution was engineered by a Panamanian faction backed by the Panama Canal Company, a French-U.S. corporation that hoped to connect the Atlantic and Pacific oceans with a waterway across the Isthmus of Panama.


In 1903, the Hay-Herrán Treaty was signed with Colombia, granting the United States use of the Isthmus of Panama in exchange for financial compensation. The U.S. Senate ratified the treaty, but the Colombian Senate, fearing a loss of sovereignty, refused. In response, President Theodore Roosevelt gave tacit approval to a rebellion by Panamanian nationalists, which began on November 3, 1903. To aid the rebels, the U.S.-administered railroad in Panama removed its trains from the northern terminus of Colón, thus stranding Colombian troops sent to crush the insurrection. Other Colombian forces were discouraged from marching on Panama by the arrival of the U.S. warship Nashville.
On November 6, the United States recognized the Republic of Panama, and on November 18 the Hay-Bunau-Varilla Treaty was signed with Panama, granting the United States exclusive and permanent possession of the Panama Canal Zone. In exchange, Panama received $10 million and an annuity of $250,000 beginning nine years later. The treaty was negotiated by U.S. Secretary of State John Hay and the owner of the Panama Canal Company. Almost immediately, the treaty was condemned by many Panamanians as an infringement on their country’s new national sovereignty.
On August 15, 1914, the Panama Canal was inaugurated with the passage of the U.S. vessel Ancon, a cargo and passenger ship. After decades of protest and negotiations, the Panama Canal passed to Panamanian control in December 1999.