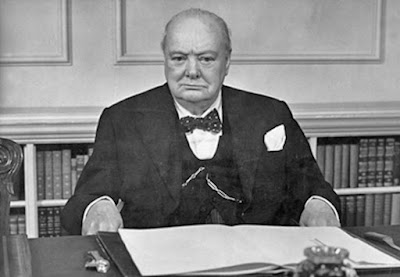 Winston Leonard Spencer Churchill, the British leader who guided Great Britain and the Allies through the crisis of World War II, is born at Blenheim Palace in Oxfordshire, England.
Churchill came from a prestigious family with a long history of military service and joined the British Fourth Hussars upon his father’s death in 1895. During the next five years, he enjoyed an illustrious military career, serving in India, the Sudan, and South Africa, and distinguishing himself several times in battle.
In 1899, he resigned his commission to concentrate on his literary and political career and in 1900 was elected to Parliament as a Conservative MP from Oldham. In 1904, he joined the Liberals, serving in a number of important posts before being appointed Britain’s First Lord of the Admiralty in 1911, where he worked to bring the British navy to a readiness for the war he foresaw.

In 1915, in the second year of World War I, Churchill was held responsible for the disastrous Dardanelles and Gallipoli campaigns, and he was excluded from the war coalition government. He resigned and volunteered to command an infantry battalion in France. However, in 1917, he returned to politics as a cabinet member in the Liberal government of Lloyd George. From 1919 to 1921, he was secretary of state for war and in 1924 returned to the Conservative Party, where two years later he played a leading role in the defeat of the General Strike of 1926. Out of office from 1929 to 1939, Churchill issued unheeded warnings of the threat of German and Japanese aggression.
After the outbreak of World War II in Europe, Churchill was called back to his post as First Lord of the Admiralty and eight months later replaced the ineffectual Neville Chamberlain as prime minister of a new coalition government. In the first year of his administration, Britain stood alone against Nazi Germany, but Churchill promised his country and the world that the British people would “never surrender.” He rallied the British people to a resolute resistance and expertly orchestrated Franklin D. Roosevelt and Joseph Stalin into an alliance that eventually crushed the Axis.
In July 1945, 10 weeks after Germany’s defeat, his Conservative government suffered an electoral loss against Clement Attlee’s Labour Party, and Churchill resigned as prime minister. He became leader of the opposition and in 1951 was again elected prime minister. Two years later, he was knighted by Queen Elizabeth II and awarded the Nobel Prize in Literature for his six-volume historical study of World War II and for his political speeches. In 1955, he retired as prime minister but remained in Parliament until 1964, the year before his death.