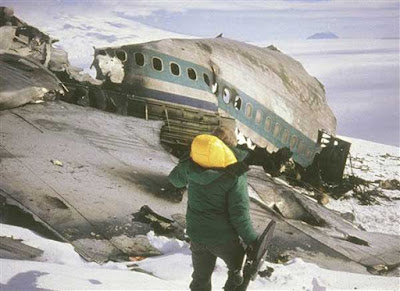 A New Zealander sightseeing plane traveling over Antarctica crashes, killing all 257 people on board, on this day in 1979. It was the worst airplane accident in New Zealand’s history.


During the 1970s, air travel to Antarctica became more popular, as tourists sought to view the isolated and mysterious continent at the bottom of the world firsthand. Day-long excursions from New Zealand gave people tremendous views of the Ross Ice Shelf. However, the trips did pose a danger, as flights to Antarctica can be problematic.
The vast ice plains provide virtually no visual reference points for pilots and magnetic compasses are useless so close to the South Pole. The McDonnell Douglas DC-10 that carried 257 people to Antarctica on November 28 was piloted by five officers who had no experience flying to the icy continent. To make matters even worse, the data entered into the flight profile was wrong. When this same data had been used on prior flights, no problems had been encountered because visibility was good. The poor visibility on November 28, though, led to a fatal pilot error.
As the plane headed over the Ross Ice Shelf, the pilot descended below the clouds to give the passengers a better view. The pilot was supposed to stay above 6,000 feet at all times, but went down to 1,500 feet due to the overcast skies. Because of the wrong data on the flight profile, the pilot didn’t know that his descent came right as the plane reached Mount Erebus, a 12,444-foot volcano. The plane crashed into the side of the mountain at 300 miles per hour. There were no survivors.