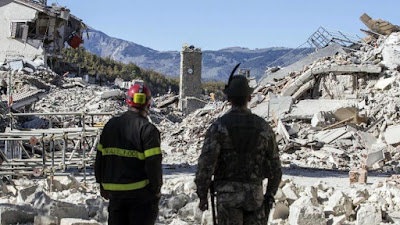 An earthquake strikes Southern Italy on this day 1980, killing more than 3,000 people. The casualty toll was so high in part because the tremor struck during Sunday night mass, as many residents sat in churches that crumbled in the quake.
The 7.2-magnitude quake struck at 7:34 p.m. on a Sunday night and was centered in Eboli, south of Naples.
In nearby Balvano, children were preparing for their first communion at the 1,000-year-old Conza Della Compagna church. The violent shaking demolished the church and killed scores of people, including 26 children.

Throughout Southern Italy, fires broke out when gas lines ruptured. Since much of the area’s water supply was disrupted by broken piping, firefighting efforts were severely hampered. In addition, extensive damage to the roads and railways leading into the small villages that dominated the region slowed down the rescue and relief efforts. To make matters even worse, a heavy fog blanketed the area that evening and the following morning.
In the Apennine Mountains, hundreds of people were seriously injured in the village of Pescaopagano, but there was no way to help them because of the heavily damaged roads. Military helicopters attempted, with limited success, to drop supplies into the area. Over the next several weeks, it became clear that approximately 3,000 people had died and 300,000 more would be homeless as winter began. The government dispatched tents to more than 200 towns affected by the earthquake and further disaster was averted.