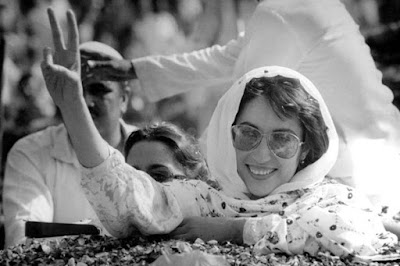 In Pakistan, citizens vote in their first open election in more than a decade, choosing as prime minister the populist candidate Benazir Bhutto, daughter of former Pakistani leader Zulfikar Ali Bhutto. She was the first woman leader of a Muslim country in modern history.


After General Mohammed Zia-ul-Haq seized power in Pakistan in a military coup in 1977, Zulfikar Bhutto was tried and executed on the charge of having ordered an assassination in 1974. Benazir Bhutto endured frequent house arrests during the next seven years. In 1984, she fled to England, where she became head of her father’s former party, the Pakistan People’s Party (PPP).
In 1988, President Zia died along with the American ambassador to Pakistan in a mysterious plane crash, leaving a power vacuum. Bhutto returned to Pakistan and launched a nationwide campaign for open elections. In elections on November 16, Bhutto’s PPP won a majority in the National Assembly, and on December 1 Bhutto took office as prime minister of Pakistan. Her government fell in 1990, but from 1993 to 1996 she again served as Pakistani leader.