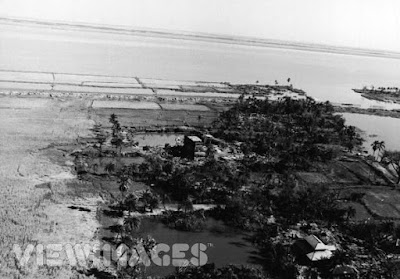 Tidal waves and storm surges strike the shores of the Ganges Delta, wreaking lethal damage on the people of East Pakistan (now Bangladesh). A 100-mph tropical cyclone spurred the deadly flood of ocean water that washed over scores of coastal islands and devastated the densely populated delta region. An estimated 500,000 people were killed in the 20th century’s worst disaster by cyclone.


Bangladesh, squeezed between India and Burma on the Bay of Bengal, is routinely struck by tropical cyclones that form in the warm waters of the giant bay, which is actually an extension of the Indian Ocean. Hurricanes and typhoons are also tropical cyclones, but these terms are local words used to describe cyclones that develop in specific parts of the globe. Tropical cyclone is the universal name for these storms.
In Bangladesh, two great river systems, the Ganges and the Brahmaputra, converge to form the largest delta in the world. These rivers carry silt from as far away as the Himalayas into the low-lying floodplain of Bangladesh, creating one of the world’s most fertile croplands. A third of the country is less than 20 feet above water, and the floodplain is densely populated. This overpopulation has forced farmers farther and farther out into the delta, where they face great dangers during the annual cyclone season. The shape of the coastline acts as a natural funnel for storm surges during this time, easily drawing deep water up the river channels.
Throughout history, the Ganges Delta had suffered many furious storms, but the November 1970 cyclone was the worst natural disaster in the region’s recorded history. It made landfall on November 12 and raged the strongest on November 13. The resulting storm surge, more than 20 feet high and topped by huge tidal waves, washed over offshore islands and carried ocean water many miles inland. The storm and flood destroyed the entire infrastructure of the country’s southern coast and killed an estimated 500,000 people, though some researchers estimate that the death count was more than a million. The failure of the West Pakistani government to respond quickly to the crisis contributed to the political turmoil that produced an independent Bangladesh in 1971.