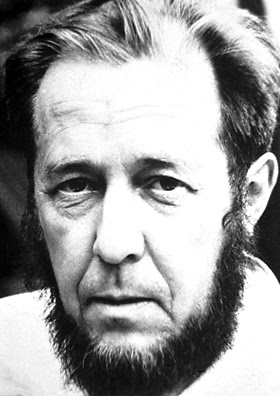 The best-known living Russian writer, Aleksandr Solzhenitsyn, wins the Nobel Prize for literature. Born in 1918 in the Soviet Union, Solzhenitsyn was a leading writer and critic of Soviet internal oppression. Arrested in 1945 for criticizing the Stalin regime, he served eight years in Russian prisons and labor camps. Upon his release in 1953 he was sent into “internal exile” in Asiatic Russia. After Stalin’s death, Solzhenitsyn was released from his exile and began writing in earnest. His first publication, One Day in the Life of Ivan Denisovich (1963), appeared in the somewhat less repressive atmosphere of Nikita Khrushchev’s regime (1955-1964). The book was widely read in both Russia and the West, and its harsh criticisms of Stalinist repression provided a dramatic insight into the Soviet system.


Eventually, however, Soviet officials clamped down on Solzhenitsyn and other Russian artists, and henceforth his works had to be secreted out of Russia in order to be published. These works included Cancer Ward (1968) and the massive three-volume The Gulag Archipelago, 1918-1956 (1973-1978). The Soviet government further demonstrated its displeasure over Solzhenitsyn’s writings by preventing him from personally accepting his Nobel Prize in 1970. In 1974, he was expelled from the Soviet Union for treason, and he moved to the United States. Although celebrated as a symbol of anticommunist resistance, Solzhenitsyn was also extremely critical of many aspects of American society; particularly what he termed its incessant materialism. He returned to Russia in 1994. Solzhenitsyn died of heart failure in Moscow on August 3, 2008. He was 89.