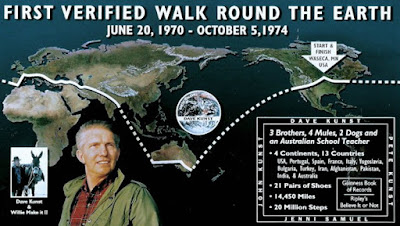 
American circumnavigates the globe on foot.

American David Kunst completes the first round-the-world journey on foot, taking four years and 21 pairs of shoes to complete the 14,500-mile journey across the land masses of four continents. He left his hometown of Waseca, Minnesota, on June 20, 1970. Near the end of his journey in 1974 he explained the reasons for his epic trek: “I was tired of Waseca, tired of my job, tired of a lot of little people who don’t want to think, and tired of my wife.” During the long journey, he took on sponsors and helped raise money for UNICEF.


He was accompanied by his brother, John, but in 1972 John Kunst was shot to death by bandits in Afghanistan and David was wounded. After returning to Minnesota to recuperate, Kunsk traveled back to Afghanistan and continued his global journey with another brother, Peter. Peter had to drop out later for health reasons, and David Kunst completed his trek alone, returning to Waseca on October 5, 1974.
American George Shilling boasted of a round-the-world journey nearly a hundred years before, but his feat was never verified. Another American, Arthur Blessitt, holds the record for the greatest distance walked and most countries visited, though he was propelled by a purpose other than record-book fame. Since 1969, Blessitt has walked more than 34,500 miles, visiting 290 countries on six continents, all the while carrying a collapsible 12-foot cross and preaching Christianity.