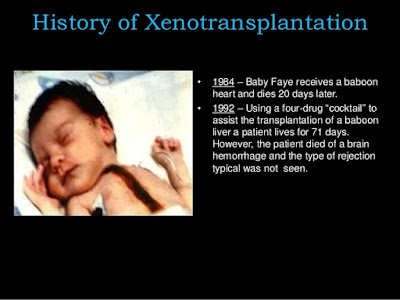 The infant, known as “Baby Fae,” was born with hypoplastic left-heart syndrome, a deformity that is almost fatal and is found in newborns in which parts or all of the left side of the heart is missing. A few days after Baby Fae’s birth, Loma Linda heart surgeon Dr. Bailey convinced Baby Fae’s mother to allow him to try the experimental baboon-heart transplant. Three other humans had received animal-heart transplants, the last in 1977, but none survived longer than 3 1/2 days. Bailey argued that an infant with an underdeveloped immune system would be less likely to reject alien tissue than an adult.
Baby Fae survived the operation, and her subsequent struggle for life received international attention. After living longer than any other human recipient of an animal heart, Baby Fae’s body made a concerted effort to reject the alien transplant. Doctors were forced to increase dosages of an immuno-suppressive drug, leading to kidney failure. Ultimately, doctors were defeated by the swift onset of heart failure, and on November 15 Baby Fae died after holding on for 20 days.