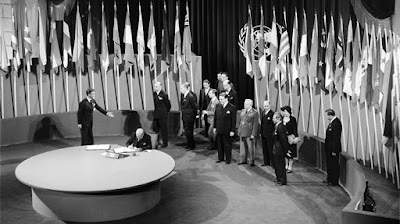 Less than two months after the end of World War II, the United Nations is formally established with the ratification of the United Nations Charter by the five permanent members of the Security Council and a majority of other signatories.
Despite the failure of the League of Nations in arbitrating the conflicts that led up to World War II, the Allies as early as 1941 proposed establishing a new international body to maintain peace in the postwar world. The idea of the United Nations began to be articulated in August 1941, when U.S. President Franklin D. Roosevelt and British Prime Minister Winston Churchill signed the Atlantic Charter,
which proposed a set of principles for international collaboration in maintaining peace and security. Later that year, Roosevelt coined “United Nations” to describe the nations allied against the Axis powers—Germany, Italy, and Japan. The term was first officially used on January 1, 1942, when representatives of 26 Allied nations met in Washington, D.C., and signed the Declaration by the United Nations, which endorsed the Atlantic Charter and presented the united war aims of the Allies.

In October 1943, the major Allied powers–Great Britain, the United States, the USSR, and China—met in Moscow and issued the Moscow Declaration, which officially stated the need for an international organization to replace the League of Nations. That goal was reaffirmed at the Allied conference in Tehran in December 1943, and in August 1944 Great Britain, the United States, the USSR, and China met at the Dumbarton Oaks estate in Washington, D.C., to lay the groundwork for the United Nations. During seven weeks, the delegates sketched out the form of the world body but often disagreed over issues of membership and voting. Compromise was reached by the “Big Three”—the United States, Britain, and the USSR—at the Yalta Conference in February 1945, and all countries that had adhered to the 1942 Declaration by the United Nations were invited to the United Nations founding conference.
On April 25, 1945, the United Nations Conference on International Organization convened in San Francisco with 50 nations represented. Three months later, during which time Germany had surrendered, the final Charter of the United Nations was unanimously adopted and signed by the delegates. The Charter called for the U.N. to maintain international peace and security, promote social progress and better standards of life, strengthen international law, and promote the expansion of human rights.
On October 24, 1945, the U.N. Charter came into force upon its ratification by the five permanent members of the Security Council and a majority of other signatories. The first U.N. General Assembly, with 51 nations represented, opened in London on January 10, 1946. On October 24, 1949, exactly four years after the United Nations Charter went into effect, the cornerstone was laid for the present United Nations headquarters, located in New York City. Since 1945, the Nobel Peace Prize has been awarded five times to the United Nations and its organizations and five times to individual U.N. officials. 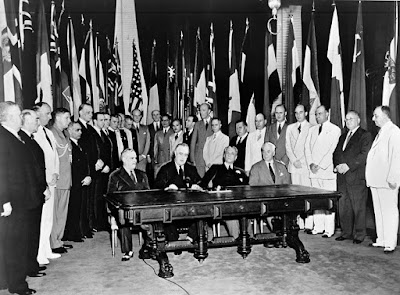