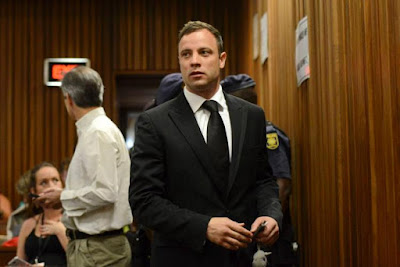 
Olympian Oscar Pistorius gets 5 years in prison for girlfriend’s death.

On this day in 2014, South Africa’s Oscar Pistorius, the first double amputee runner to compete at the Olympics, is sentenced to five years behind bars after being found guilty of culpable homicide, the equivalent of manslaughter, in the February 2013 death of his girlfriend, 29-year-old Reeva Steenkamp. The world-famous track star admitted to fatally shooting Steenkamp, a model and law graduate, at his home in Pretoria, South Africa, but claimed he mistook her for an intruder.


Born in 1986 without fibulas, Pistorius had his legs amputated below the knees before his first birthday. Growing up, he used prostheses and started running track as a teen. A sprinter, he won gold and silver medals at the 2004 Summer Paralympics in Greece then began competing in meets against able-bodied athletes. In 2008, track and field’s governing organization banned him from able-bodied competitions because it believed the J-shaped carbon fiber blades he wore to race—and which earned him the nickname Blade Runner—provided an unfair advantage. However, Pistorius appealed the ruling and it was struck down later that year. He went on to compete for his homeland at the 2012 Summer Olympics in London and, though he failed to collect any medals, his history-making appearance inspired people around the globe and he racked up lucrative endorsement deals.
In a stunning turn of events less than a year later, Pistorius was arrested on February 14, 2013, for killing Steenkamp, his girlfriend of about three months. The athlete said that in the early hours of Valentine’s Day he’d accidentally shot Steenkamp after mistaking her for an intruder; he claimed he thought she still was in bed when he got a gun and fired four shots through a bathroom door, only to discover that Steenkamp, not an intruder, was inside. Pistorius subsequently was charged with premeditated murder, to which he pleaded not guilty.
During his trial, which began in March 2014 and generated international media coverage, prosecutors portrayed the track star as jealous and hotheaded and contended he’d fought with Steenkamp, a fellow South African, before shooting and killing her. Some neighbors in Pistorius’ gated community testified they’d heard a woman screaming around the same time they heard gunfire coming from his home, and text messages between Steen¬kamp and Pistorius were read in court in which she expressed unhappiness with his behavior and said she was sometimes scared of him. The defense later demonstrated these messages represented only a tiny fraction of the total number of texts exchanged by the couple. Additionally, attorneys for Pistorius, who wept and vomited throughout portions of his trial, argued the former Olympian felt highly anxious and vulnerable at the time of the shooting because he wasn’t wearing his prosthetic legs and wouldn’t be able to run from an intruder. The defense also held that the screams heard by neighbors on the night of the shooting came from Pistorius, rather than Steenkamp, after realizing he’d accidentally shot her and was calling for help in a distraught, high-pitched voice.
On September 12, 2014, Judge Thokozile Matilda Masipa found the 27-year-old Pistorius guilty of culpable homicide, after acquitting him the previous day of the more serious charge of murder. The following month, on October 21, the former Olympian received a five-year prison sentence, which he began serving immediately. He also was given a suspended three-year sentence for a separate firearms charge.