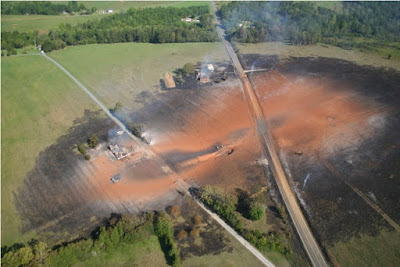 On this day in 1998, a pipeline explosion in Jesse, Nigeria, kills 700 people. The resulting fire burned for nearly a week.
Nigeria is an oil-rich country on the west coast of Africa. The oil fields are controlled by several multi-national corporations in cooperation with the Nigerian government. Very little of the proceeds from oil exports reaches the average citizen of the country and millions of people live in abject poverty. In fact, gas pipelines run right through impoverished villages.


One such pipeline ran through the town of Jesse, where it became commonplace for residents to steal oil from the pipeline to supplement their meager incomes. This was known as “bunkering” and was taking place on October 18, when a helicopter was dispatched to disperse the people assembled at the pipeline. Just after the helicopter arrived, a massive fireball shot up 100 feet into the sky. The exact cause of the explosion remains unknown.
The pipeline explosion incinerated hundreds of people instantly. Others died from agonizing burn injuries. The fire burned so hot that rescue workers could not approach the scene for six days. Meanwhile, survivors, some suffering from terrible burns, were afraid to go to the hospital for fear that they would be charged with theft or be blamed for causing the fire.
Finally, specialists from Houston, Texas, arrived with firefighting foam that helped the firefighters extinguish the blaze. Heavier security surrounding the pipelines was instituted in the wake of this disaster.