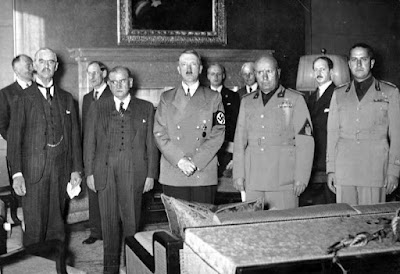 British and French prime ministers Neville Chamberlain and Edouard Daladier sign the Munich Pact with Nazi leader Adolf Hitler. The agreement averted the outbreak of war but gave Czechoslovakia away to German conquest.


In the spring of 1938, Hitler began openly to support the demands of German-speakers living in the Sudeten region of Czechoslovakia for closer ties with Germany. Hitler had recently annexed Austria into Germany, and the conquest of Czechoslovakia was the next step in his plan of creating a “greater Germany.” The Czechoslovak government hoped that Britain and France would come to its assistance in the event of German invasion, but British Prime Minister Chamberlain was intent on averting war. He made two trips to Germany in September and offered Hitler favorable agreements, but the Fuhrer kept upping his demands.
On September 22, Hitler demanded the immediate cession of the Sudetenland to Germany and the evacuation of the Czechoslovak population by the end of the month. The next day, Czechoslovakia ordered troop mobilization. War seemed imminent, and France began a partial mobilization on September 24. Chamberlain and French Prime Minister Daladier, unprepared for the outbreak of hostilities, traveled to Munich, where they gave in to Hitler’s demands on September 30.
Daladier abhorred the Munich Pact’s appeasement of the Nazis, but Chamberlain was elated and even stayed behind in Munich to sign a single-page document with Hitler that he believed assured the future of Anglo-German peace. Later that day, Chamberlain flew home to Britain, where he addressed a jubilant crowd in London and praised the Munich Pact for bringing “peace with honor” and “peace in our time.” The next day, Germany annexed the Sudetenland, and the Czechoslovak government chose submission over destruction by the GermanWehrmacht. In March 1939, Hitler annexed the rest of Czechoslovakia, and the country ceased to exist.
On September 1, 1939, 53 German army divisions invaded Poland despite British and French threats to intervene on the nation’s behalf. Two days later, Chamberlain solemnly called for a British declaration of war against Germany, and World War II began. After eight months of ineffectual wartime leadership, Chamberlain was replaced as prime minister by Winston Churchill. 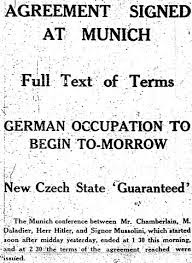