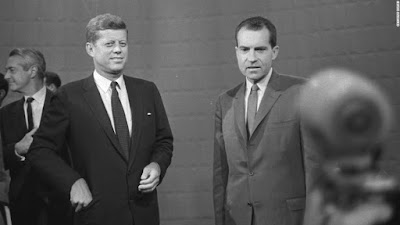 For the first time in U.S. history, a debate between major party presidential candidates is shown on television. The presidential hopefuls, John F. Kennedy, a Democratic senator of Massachusetts, and Richard M. Nixon, the vice president of the United States, met in a Chicago studio to discuss U.S. domestic matters.


Kennedy emerged the apparent winner from this first of four televised debates, partly owing to his greater ease before the camera than Nixon, who, unlike Kennedy, seemed nervous and declined to wear makeup. Nixon fared better in the second and third debates, and on October 21 the candidates met to discuss foreign affairs in their fourth and final debate. Less than three weeks later, on November 8, Kennedy won 49.7 percent of the popular vote in one of the closest presidential elections in U.S. history, surpassing by a fraction the 49.6 percent received by his Republican opponent.
One year after leaving the vice presidency, Nixon returned to politics, winning the Republican nomination for governor of California. Although he lost the election, Nixon returned to the national stage in 1968 in a successful bid for the presidency. Like Lyndon Johnson in 1964, Nixon declined to debate his opponent in the 1968 presidential campaign. Televised presidential debates returned in 1976, and have been held in every presidential campaign since.