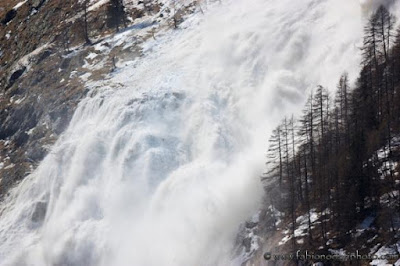 A glacial avalanche in Russia buries a village on this day in 2002, killing more than 100 people.
The North Ossetia area of Russia was hard hit by floods in June 2002. These floods, along with an early and hot summer, proved to be a precursor to a much larger disaster in September. Large glaciers sit above the town of Vladikavkaz. With higher than normal temperatures in 2002, increased water runoff showed that these glaciers were beginning to melt and weaken.


On the afternoon of September 20, a 400-foot-tall chunk of ice broke from a large glacier and plunged down the side of the mountain. The resulting avalanche picked up speed, hitting close to 100 miles per hour at its fastest and traveling an astonishing 20 miles, destroying everything in its path. The village of Karmadon was completely buried by tons of stone and ice. Rescue efforts began immediately and continued for weeks. Twenty-seven people were pulled out alive. Finding victims’ remains proved to be much more difficult work. Even weeks after the avalanche, less than half the150 people who had been reported missing had been found.
In total, the avalanche caused $20 million in damages. Had it traveled just a few miles further and hit Vladikavkaz, the death and damage toll would have been far worse.