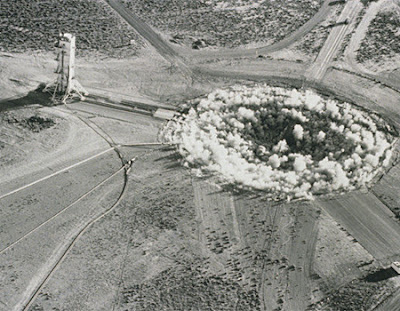 On this day in 1957, the United States detonates a 1.7 kiloton nuclear weapon in an underground tunnel at the Nevada Test Site (NTS), a 1,375 square mile research center located 65 miles north of Las Vegas. The test, known as Rainier, was the first fully contained underground detonation and produced no radioactive fallout. A modified W-25 warhead weighing 218 pounds and measuring 25.7 inches in diameter and 17.4 inches in length was used for the test. Rainier was part of a series of 29 nuclear weapons and nuclear weapons safety tests known as Operation Plumbbob that were conducted at the NTS between May 28, 1957, and October 7, 1957.


In December 1941, the U.S. government committed to building the world’s first nuclear weapon when President Franklin Roosevelt authorized $2 billion in funding for what came to be known as the Manhattan Project. The first nuclear weapon test took place on July 16, 1945, at the Trinity site near Alamogordo, New Mexico. A few weeks later, on August 6, 1945, with the U.S. at war against Japan, President Harry Truman authorized the dropping of an atomic bomb named Little Boy over Hiroshima, Japan. Three days later, on August 9, a nuclear bomb called Fat Man was dropped over Nagasaki. Two hundred thousand people, according to some estimates, were killed in the attacks on the two cities and on August 15, 1945, Japan surrendered to the Allied Powers.
1957’s Operation Plumbbob took place at a time when the U.S. was engaged in a Cold War and nuclear arms race with the Soviet Union. In 1963, the U.S. signed the Limited Test Ban Treaty, which banned nuclear weapons testing in the atmosphere, underwater and outer space. A total of 928 tests took place at the Nevada Test Site between 1951 and 1992, when the U.S. conducted its last underground nuclear test. In 1996, the U.S signed the Comprehensive Test Ban Treaty, which prohibits nuclear detonations in all environments.