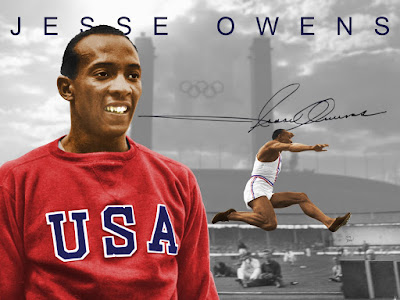 At the 1936 Berlin Olympics, African American track star Jesse Owens wins his fourth gold medal of the Games in the 4×100-meter relay. His relay team set a new world record of 39.8 seconds, which held for 20 years. In their strong showing in track-and-field events at the XIth Olympiad, Jesse Owens and other African American athletes struck a propaganda blow against Nazi leader Adolf Hitler, who planned to use the Berlin Games as a showcase of supposed Aryan superiority.


Born the son of Alabama sharecroppers in 1913, Owens emerged as a major track talent while attending high school in Cleveland, Ohio. Later, at Ohio State University, he demonstrated himself to be one of the greatest athletes in the world. In a single day of competition–May 25, 1935–Owens broke the world records for the 220-yard dash, the 220-yard low hurdles, and the running broad jump, and equaled the world record for the 100-yard dash. The next summer, Owens and 311 other American athletes, including 17 African Americans, traveled to Nazi Germany to represent the United States at the XIth Olympiad.
In 1931, the International Olympic Committee awarded the 1936 Summer Olympics to Berlin. The choice was meant to signal Germany’s return to the world community after defeat in World War I. Two years later, however, Adolf Hitler came to power. He transformed the democratic German government into a one-party dictatorship, purged political opponents and suspected dissidents, instituted anti-Semitic policies, and began the remilitarization of Germany.
Hitler initially held the Olympics in low regard because of their internationalism but became an avid supporter after Nazi propaganda minister Joseph Goebbels convinced him of their propaganda value. Seen as an opportunity to advance Nazi ideology, Hitler provided extensive funding for the Berlin Games, which promised to be the largest modern Olympics to date. The Nazi government used sport as part of its drive to strengthen the “Aryan race,” and “Non-Aryans”–Jewish, part-Jewish, or Gypsy athletes–were systematically excluded from Nazi-sponsored sports facilities and associations.
By 1935, a number of athletic groups in the United States were pushing for a boycott of the Berlin Games, but after a heated debate U.S. participation was narrowly approved in December 1935. A number of prominent Jewish athletes in the United States and other countries decided to independently boycott the Games in protest of Nazi oppression of Jews. Spain also planned an alternate “People’s Olympics” to be held in Barcelona in July 1936, but the outbreak of the Spanish Civil War forced its cancellation. In the end, 49 nations sent some 4,000 athletes to the Summer Olympics in Berlin.
Under international pressure, the Nazis agreed to allow one part-Jewish athlete on its Olympic team: fencer Helene Mayer. However, Joseph Goebbels forbid the Nazi-controlled German press from discussing the ethnicity of the blond-haired Mayer.
On August 1, 1936, Adolf Hitler opened the XIth Olympiad. The Olympic ritual of a runner arriving bearing a torch carried by relay from Olympia, Greece, occurred for the first time. The Nazis advertised this ceremony as a symbol of the myth that German civilization was the inheritor of the glorified culture of ancient Greece.
Olympic flags and swastika-bearing Nazi banners hung everywhere in Berlin. To prevent controversy, the anti-Jewish signs hung throughout the city were removed during the Games, and Jewish athletes and visitors from other countries were not subjected to anti-Jewish laws. Gypsies were cleared off the streets and interned in a camp at the edge of Berlin. A festive and hospitable atmosphere pervaded the German capital, and most tourists left the city with positive memories of their stay there.
With 348 athletes, Germany had the largest national team and captured the most medals overall, greatly pleasing Hitler. The Americans, however, dominated the popular track-and-field events. On the first day of competition, Hitler, who had been congratulating German and select other winners, left the stadium shortly after three African Americans swept the high-jump event. Whether Hitler left to avoid shaking hands with non-Aryans is unclear. In the aftermath of the incident, Olympic organizers asked Hitler to either receive all the medal winners or none, and he chose the latter. Contrary to the popular myth, Hitler never directly snubbed Jesse Owens, but he did continue to privately receive German winners throughout the Games.
With his four gold medals, Jesse Owens was the star of the Berlin Olympics. He equaled the world record (10.3 seconds) in the 100-meter race and broke the world records in the 200-meter race (20.7 seconds) and in the broad jump (26 feet 5 3/8 inches). He was enthusiastically applauded by the largely German crowd and developed a friendship with German long jumper and silver medalist Luz Long. However, he and other African American Olympians were demeaned by a Nazi newspaper that wrote of them as the “black auxiliaries” of the American team.
On August 9, Owens won his fourth medal as a member of the mixed-race 4×100-meter relay team. The world-record-breaking triumph was tainted by the revelation that U.S. coaches had benched two American Jewish relay runners the day before the event. Marty Glickman and Sam Stoller were replaced with Owens and African American Ralph Metcalfe, the two best U.S. sprinters. However, both Stoller and Glickman had out-run Foy Draper, a white American who remained on the team, in a practice race. The coaches said Draper was more experienced, but Glickman and others thought that anti-Semitism was involved. Stoller, however, thought favoritism was to blame, as Draper and the fourth runner, Frank Wykoff, had trained under one of the Olympic coaches at the University of Southern California.
Despite the embarrassment of seeing his best Aryan runners bested by African Americans, Adolf Hitler hailed the Berlin Olympics as a great success. He commissioned a German architect to design a colossal, 400,000-seat stadium at Nuremberg that would host Olympics for “all time to come.” The outbreak of World War II in 1939 prevented the building of the stadium, and by 1945 Hitler’s plans for Nazi world domination had ended in absolute defeat. In the decades of Cold War that followed, the United States and the Soviet Union exploited the propaganda potential of the Olympic Games as freely as the Nazis did at Berlin in 1936.
Although only 23, Jesse Owens retired from amateur competition shortly after the Berlin Olympics in order to capitalize on his fame. This effectively brought his athletic career to an end. He later engaged in boys’-guidance activities, made goodwill visits to Asia for the U.S. Department of State, and served as secretary of the Illinois State Athletic Commission. He died in 1980. 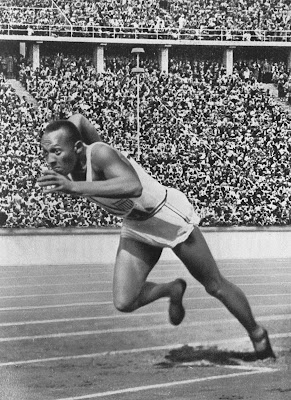