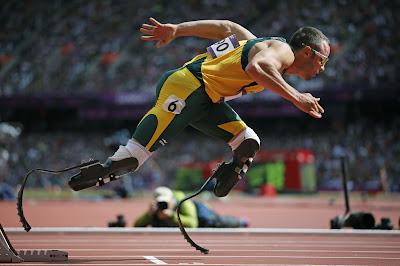 Oscar Pistorius becomes the first amputee runner to compete at the Olympics.

On this day in 2012 in London, Oscar Pistorius of South Africa becomes the first amputee to compete at the Olympics by running in an opening heat of the men’s 400-meter. Pistorius finished second out of five runners and advanced to the semifinals, where he finished eighth out of eight runners. Nicknamed “Blade Runner” because of the J-shaped carbon fiber blades he wears to run, Pistorius inspired people around the world. His image would drastically change early the next year when the star athlete was arrested for the murder of his girlfriend.


Pistorius was born on November 22, 1986, without the fibula (a bone between the calf and ankle) in either of his legs. When he was 11 months old, the Johannesburg native’s legs were amputated below the knees. (Doctors had advised his parents it would be easier to have the procedure done before Pistorius learned to walk.) Growing up, he used prosthetic legs and participated in numerous sports. After injuring his knee playing rugby in high school, he started running track as a form of rehabilitation.
In 2004 Pistorius competed at the Summer Paralympics in Athens, Greece, where he won a gold medal in the 200-meter, with a record-setting time of 21.97 seconds. He also won bronze in the 100-meter. Pistorius soon began competing in meets against able-bodied athletes. However, in January 2008, the International Association of Athletics Federations (IAFF), track and field’s governing organization, banned him from able-bodied competitions because it believed Pistorius’ blades, known as “Flex-Foot Cheetahs,” gave him an unfair advantage. The IAFF, which had conducted scientific tests with Pistorius, claimed his blades enabled him to use less energy than able-bodied athletes while covering the same distance, and therefore run faster. Pistorius appealed the IAFF’s ruling, and in May 2008 the Court of Arbitration struck down the IAFF’s decision and the ban was lifted.
Later that same year, at the Paralympics in Beijing, China, Pistorius won gold in the 100-, 200- and 400- meter events, and set a world record of 47.49 seconds in the 400-meter. Over the next few years, he continued to compete against able-bodied athletes. In 2011 he was part of the South African squad that won a silver medal in the 4×400-meter relay at the World Championships in Athletics in South Korea, and in June 2012 he clinched silver in the individual 400-meter at the African Athletics Championships in Benin. The following month, Pistorius was selected to compete for his homeland in the individual 400-meter and 4×400 relay at the Olympics Games in London.
Pistorius began his history-making appearance at the Olympics on August 4, 2012, by taking second place in his five-man preliminary heat in the 400-meter, with a time of 45.44 seconds. At the semifinals the next day, Pistorius finished in last place, with a time of 46.54 seconds, and failed to advance to the finals. On August 9, he was supposed to run the third leg of the 4×400 relay, but his teammate collided with a runner from Kenya before he was able to hand off the baton to Pistorius, and the South Africans did not finish the race. After filing a protest, South Africa was allowed to compete in the finals the next day; the team, anchored by Pistorius, finished in eighth place. At the London Paralympics in September, Pistorius won gold medals with record-setting times in the 400-meter and the 4×100 relay, along with a silver medal in the 200-meter.
Then, on February 14, 2013, Pistorius was arrested for the murder of his girlfriend, 29-year-old Reeva Steenkamp, whom he admitted to fatally shooting at his Pretoria, South Africa, home earlier that day. Pistorius claimed he mistook Steenkamp, a model and law graduate, for an intruder. He was charged with premeditated murder, to which he pleaded not guilty when his case went to trial in March 2014, amidst intense media coverage. That September, Pistorius was found guilty of culpable homicide, the equivalent of manslaughter, but cleared of the more serious charge of murder. In October 2014, the 27-year-old former Olympian was sentenced to five years in prison. 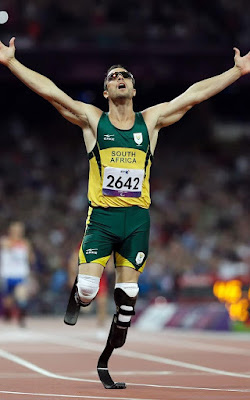 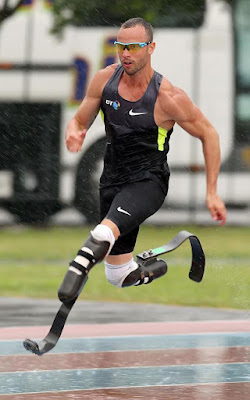