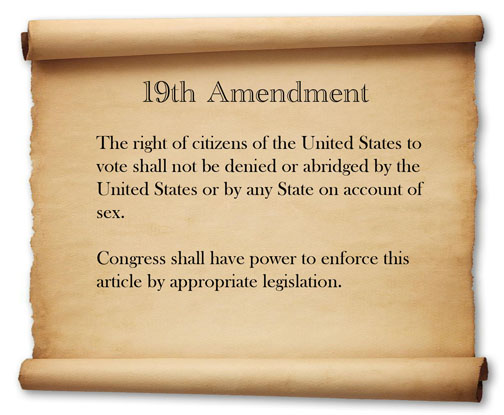 The 19th Amendment, guaranteeing women the right to vote, is formally adopted into the U.S. Constitution by proclamation of Secretary of State Bainbridge Colby. The amendment was the culmination of more than 70 years of struggle by woman suffragists. Its two sections read simply: “The right of citizens of the United States to vote shall not be denied or abridged by the United States or by any State on account of sex” and “Congress shall have power to enforce this article by appropriate legislation.”


America’s woman suffrage movement was founded in the mid 19th century by women who had become politically active through their work in the abolitionist and temperance movements. In July 1848, 200 woman suffragists, organized by Elizabeth Cady Stanton and Lucretia Mott, met in Seneca Falls, New York, to discuss women’s rights. After approving measures asserting the right of women to educational and employment opportunities, they passed a resolution that declared “it is the duty of the women of this country to secure to themselves their sacred right to the elective franchise.” For proclaiming a women’s right to vote, the Seneca Falls Convention was subjected to public ridicule, and some backers of women’s rights withdrew their support. However, the resolution marked the beginning of the woman suffrage movement in America.
The first national woman’s rights convention was held in 1850 and then repeated annually, providing an important focus for the growing woman suffrage movement. In the Reconstruction era, the 15th Amendment to the U.S. Constitution was adopted, granting African American men the right to vote, but Congress declined to expand enfranchisement into the sphere of gender. In 1869, the National Woman Suffrage Association was founded by Susan B. Anthony and Elizabeth Cady Stanton to push for a woman suffrage amendment to the U.S. Constitution. Another organization, the American Woman Suffrage Association, led by Lucy Stone, was formed in the same year to work through the state legislatures. In 1890, these two groups were united as the National American Woman Suffrage Association. That year, Wyoming became the first state to grant women the right to vote.
By the beginning of the 20th century, the role of women in American society was changing drastically: Women were working more, receiving a better education, bearing fewer children, and three more states (Colorado, Utah, and Idaho) had yielded to the demand for female enfranchisement. In 1916, the National Woman’s Party (formed in 1913 at the Congressional Union for Woman Suffrage) decided to adopt a more radical approach to woman suffrage. Instead of questionnaires and lobbying, its members picketed the White House, marched, and staged acts of civil disobedience.
In 1917, America entered World War I, and women aided the war effort in various capacities that helped break down most of the remaining opposition to woman suffrage. By 1918, women had acquired equal suffrage with men in 15 states, and both the Democratic and Republican parties openly endorsed female enfranchisement.
In January 1918, the woman suffrage amendment passed the House of Representatives with the necessary two-thirds majority vote. In June 1919, it was approved by the Senate and sent to the states for ratification. Campaigns were waged by suffragists around the country to secure ratification, and on August 18, 1920, Tennessee became the 36th state to ratify the amendment, giving it the two-thirds majority of state ratification necessary to make it the law of the land.
The package containing the certified record of the action of the Tennessee legislature was sent by train to the nation’s capital, arriving in the early hours of August 26. At 8 a.m. that morning, Secretary of State Bainbridge Colby signed it without ceremony at his residence in Washington. None of the leaders of the woman suffrage movement were present when the proclamation was signed, and no photographers or film cameras recorded the event. That afternoon, Carrie Chapman Catt, head of the National American Suffrage Association, was received at the White House by President Woodrow Wilson and Edith Wilson, the first lady.