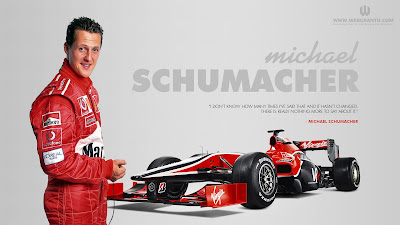 The German race car driver Michael Schumacher makes his Formula One (Europe’s top racing circuit) debut in the Belgian Grand Prix at Spa Francorchamps on this day in 1991.


Schumacher was born in Hurth-Hermulhein, West Germany, in 1969. His father managed a go-kart track in the town of Kerpen, and young Michael won the German junior karting championship in 1984 and 1985 and the German and European titles in 1987. He left school to work as a car mechanic and in 1988 began racing on the Formula Three circuit, which features less-powerful vehicles than those of Formula One. After winning the German Formula Three championship in 1990, Schumacher made the move to the big time: The next August, he made his Formula One debut at Spa, racing for Irish businessman Eddie Jordan’s team.
Though Schumacher retired during the first lap of that first Grand Prix (as individual Formula One events are called) with clutch problems, he drew the attention of Benetton, another Formula One constructor owned by the same family as the international clothing store chain. Benetton soon snapped up the rising young star (he and Jordan had not signed a contract), beginning a successful five-year collaboration. Schumacher won the drivers’ world championship, Formula One’s top honor, for the team in 1994–a season marred by the death of the Brazilian driver Ayrton Senna in the San Marino Grand Prix and accusations of technical irregularities against the Benetton team–and 1995.
Schumacher signed with the venerable Ferrari team before the 1996 season. Things began well, despite an incident in 1997 when Schumacher tried in vain to ram the car of his top rival, Jacques Villeneuve, off the road during the final race, at Jerez in Spain; he was stripped of his second-place finish as punishment. After crashing his Ferrari during the 1999 British Grand Prix–he emerged with a broken leg, the only injury of his career to date–Schumacher won the 2000 drivers’ world championship (Ferrari’s first since 1979). He went on to win the title another four years in a row, racking up nine Grand Prix wins in 2001 and 11 in 2002. His sixth drivers’ title in 2003 broke the previous record, held by the Argentine driver Juan Manual Fangio. In 2004, Schumacher won 13 of 18 total Grand Prix races held that year, easily securing his seventh championship.
At the age of 37, still at the top of his game, Schumacher retired from racing. During his final season in 2006, he won seven Grand Prix races, bringing his career total to 91, and making him by far the winningest driver in Formula One history (his closest rival, the French driver Alain Prost, had 51).