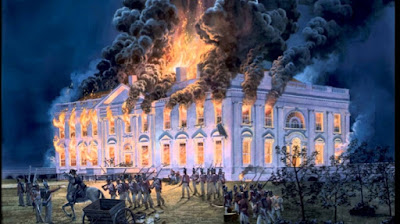 During the War of 1812, British forces under General Robert Ross overwhelm American militiamen at the Battle of Bladensburg, Maryland, and march unopposed into Washington, D.C. Most congressmen and officials fled the nation’s capital as soon as word came of the American defeat, but President James Madison and his wife, Dolley, escaped just before the invaders arrived. Earlier in the day, President Madison had been present at the Battle of Bladensburg and had at one point actually taken command of one of the few remaining American batteries, thus becoming the first and only president to exercise in actual battle his authority as commander in chief.


The British army entered Washington in the late afternoon, and General Ross and British officers dined that night at the deserted White House. Meanwhile, the British troops, ecstatic that they had captured their enemy’s capital, began setting the city aflame in revenge for the burning of Canadian government buildings by U.S. troops earlier in the war. The White House, a number of federal buildings, and several private homes were destroyed. The still uncompleted Capitol building was also set on fire, and the House of Representatives and the Library of Congress were gutted before a torrential downpour doused the flames.
On August 26, General Ross, realizing his untenable hold on the capital area, ordered a withdrawal from Washington. The next day, President Madison returned to a smoking and charred Washington and vowed to rebuild the city. James Hoban, the original architect of the White House, completed reconstruction of the executive mansion in 1817.