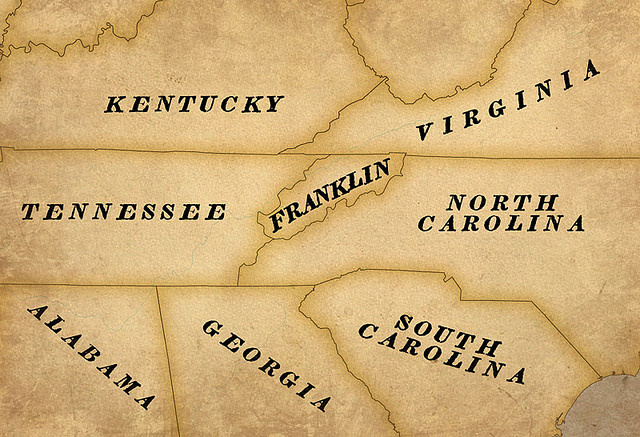 On this day in 1784, four counties in western North Carolina declare their independence as the state of Franklin. The counties lay in what would eventually become Tennessee.


The previous April, the state of North Carolina had ceded its western land claims between the Allegheny Mountains and the Mississippi River to the United States Congress. The settlers in this area, known as the Cumberland River Valley, had formed their own independent government from 1772 to 1777 and were concerned that Congress would sell the territory to Spain or France as a means of paying off some of the government’s war debt. As a result, North Carolina retracted its cession and began to organize an administration for the territory.
Simultaneously, representatives from Washington, Sullivan, Spencer (modern-day Hawkins) and Greene counties declared their independence from North Carolina. The following May, the counties petitioned for statehood as “Frankland” to the United States Congress. A simple majority of states favored acceptance of the petition, but it fell short of the two-thirds majority needed to pass, even after the counties’ changed their proposed name to “Franklin” in an attempt to curry Benjamin Franklin’s and others’ favor.
In defiance of Congress, Franklin survived as an independent nation for four years with its own constitution, Indian treaties and legislated system of barter in lieu of currency, though after only two years, North Carolina set up its own parallel government in the region. Finally, Franklin’s weak economy forced its governor, John Sevier, to approach the Spanish for aid. North Carolina, terrified of having a Spanish client state on its border, arrested Sevier. When Cherokee, Chickamauga and Chickasaw began to attack settlements within Franklin’s borders in 1788, it quickly rejoined North Carolina to gain its militia’s protection from attack.