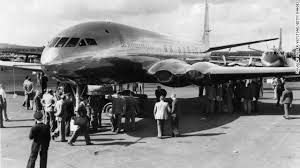 On this day in 1949, the world’s first jet-propelled airliner, the British De Havilland Comet, makes its maiden test-flight in England. The jet engine would ultimately revolutionize the airline industry, shrinking air travel time in half by enabling planes to climb faster and fly higher.


The Comet was the creation of English aircraft designer and aviation pioneer Sir Geoffrey de Havilland (1882-1965). De Havilland started out designing motorcycles and buses, but after seeing Wilbur Wright demonstrate an airplane in 1908, he decided to build one of his own. The Wright brothers had made their famous first flight at Kitty Hawk, North Carolina, in 1903. De Havilland successfully designed and piloted his first plane in 1910 and went on to work for English aircraft manufacturers before starting his own company in 1920. De Havilland Aircraft Company became a leader in the aviation industry, known for developing lighter engines and faster, more streamlined planes.
In 1939, an experimental jet-powered plane debuted in Germany. During World War II, Germany was the first country to use jet fighters. De Havilland also designed fighter planes during the war years. He was knighted for his contributions to aviation in 1944.
Following the war, De Havilland turned his focus to commercial jets, developing the Comet and the Ghost jet engine. After its July 1949 test flight, the Comet underwent three more years of testing and training flights. Then, on May 2, 1952, the British Overseas Aircraft Corporation (BOAC) began the world’s first commercial jet service with the 44-seat Comet 1A, flying paying passengers from London to Johannesburg. The Comet was capable of traveling 480 miles per hour, a record speed at the time. However, the initial commercial service was short-lived, and due to a series of fatal crashes in 1953 and 1954, the entire fleet was grounded. Investigators eventually determined that the planes had experienced metal fatigue resulting from the need to repeatedly pressurize and depressurize. Four years later, De Havilland debuted an improved and recertified Comet, but in the meantime, American airline manufacturers Boeing and Douglas had each introduced faster, more efficient jets of their own and become the dominant forces in the industry. By the early 1980s, most Comets used by commercial airlines had been taken out of service.