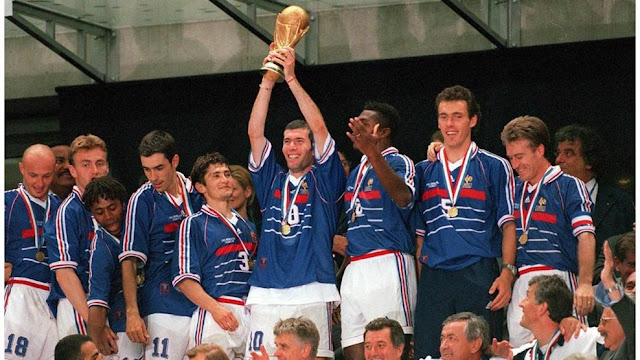 On July 12, 1998, France defeats favored Brazil 3-0 to win the FIFA World Cup at Stade de France in Saint Denis. This was the first World Cup France had hosted since 1938 and the country’s first-ever World Cup title.


The 1998 Les Bleus was a multi-ethnic squad that reflected the country’s diverse post-World War II make-up. Defender Lilian Thuram was from Guadeloupe, junior striker Thierry Henry was of Antillean heritage and brilliant playmaker Zinedine Zidane was descended from northern Algerian Berbers. Though from varied backgrounds, the players shared a common determination to improve on France’s performance in 1994, when the team failed to even qualify for the World Cup. At the team’s core was a stingy defense that allowed only two goals through its first seven World Cup games.
Even after a shootout victory over a disciplined Italian team in the quarterfinals and a 2-1 win over Croatia in the semi-finals, few believed France had a true shot at the championship, especially against world-renowned Brazil, led by Ronaldo, a precocious goal-scorer and the 1996 and 1997 FIFA Player of the Year. Although the 21-year-old would go on to be named the Most Valuable Player of the 1998 World Cup behind four goals and three assists, he came into the final against France with a sore ankle and a headache that left him dizzy.
To the surprise of many in the soccer establishment, the usually prolific Brazilians were unable to crack France’s defense and went scoreless in 90 minutes of play. Meanwhile, in the 27th minute of play, Zidane scored his first goal of the tournament, heading the ball into the goal off a corner kick and sending an excited buzz through the mostly French crowd. Twenty-one minutes later, Zidane scored a second time, again on a header from a corner kick, and the 80,000 spectators at Stade de France erupted. In the 68th minute, however, French defender Marcel Desailly was given his second yellow card and ejected. Though the French were now forced to play down one man, they continued to attack and in the third minute of added time, midfielder Emanuel Petit scored to put the French up 3-0 and ensure the team’s first World Cup victory.
France was the first host nation to win the World Cup since Argentina in 1978.