Parts of Skylab, America’s first space station, come crashing down on Australia and into the Indian Ocean five years after the last manned Skylab mission ended. No one was injured.


Launched in 1973, Skylab was the world’s first successful space station. The first manned Skylab mission came two years after the Soviet Union launched Salynut 1,the world’s first space station, into orbit around the earth. However, unlike the ill-fated Salynut, which was plagued with problems, the American space station was a great success, safely housing three separate three-man crews for extended periods of time.
Originally the spent third stage of a Saturn 5 moon rocket, the cylindrical space station was 118 feet tall, weighed 77 tons, and carried the most varied assortment of experimental equipment ever assembled in a single spacecraft to that date. The crews of Skylab spent more than 700 hours observing the sun and brought home more than 175,000 solar pictures. They also provided important information about the biological effects of living in space for prolonged periods of time.
Five years after the last Skylab mission, the space station’s orbit began to deteriorate–earlier than was anticipated–because of unexpectedly high sunspot activity. On July 11, 1979, Skylab made a spectacular return to earth, breaking up in the atmosphere and showering burning debris over the Indian Ocean and Australia. 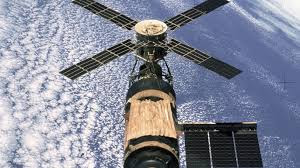