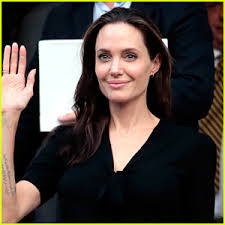 On this day in 1975, the Academy Award-winning actress Angelina Jolie (Voight) is born in Los Angeles, California.
Jolie’s father, the actor Jon Voight, had been nominated for a Best Actor Oscar forMidnight Cowboy (1969); he won the award for Coming Home (1978). Her mother, Marcheline Bertrand, was also an actress; the couple divorced when Angelina was still an infant. As a young girl, Jolie worked as a model and appeared with her father in the 1982 film Lookin’ to Get Out. She later studied acting at the famed Lee Strasberg Theatre Institute and New York University. After appearing in a small role in Cyborg 2 (1993), Jolie landed a sizeable part in the better-known Hackers(1995), which co-starred the British actor Jonny Lee Miller. Jolie and Miller married that year but split in 1997 and later divorced.
After a string of forgettable films, Jolie was nominated for an Emmy and won a Golden Globe for her role as the wife of the segregationist Alabama governor, in the television movie George Wallace. She earned another Emmy nod the following year for her portrayal of the troubled bisexual model Gia Carangi in the TV biopicGia. Suddenly very much in demand, Jolie landed roles in higher-profile big-screen projects such as Playing By Heart (1998), Pushing Tin (1999) and The Bone Collector(1999).

It was Jolie’s mesmerizing turn as the charismatic sociopath Lisa in Girl, Interrupted, however, that catapulted her to A-list Hollywood stardom. She won an Academy Award for Best Supporting Actress for the role, and characteristically raised eyebrows by locking lips with her older brother, James Haven, at the 2000 Oscar ceremony. That May, Jolie again generated a flurry of headlines when she wed Billy Bob Thornton, her much older, four-times-married co-star in Pushing Tin(1999), in a quickie ceremony in Las Vegas. Later in 2000, Jolie starred in the fast-paced hit Gone in Sixty Seconds and the thriller Original Sin. During a brief reconciliation with her father, the two appeared together in Lara Croft: Tomb Raider (2001), a blockbuster action film in which Jolie performed the majority of her own stunts. Despite poor reviews, Tomb Raider and its 2003 sequel were both huge box-office hits. Less successful was the romantic comedy-drama Life or Something Like It (2002).
The press painted a vivid picture of Jolie and Thornton’s eccentric devotion to each other, including the fact that they wore vials of each other’s blood around their necks. Still, Jolie filed for divorce in mid-2002. By that time, she had been appointed a goodwill ambassador by the United Nations, having first made goodwill trips while researching her role as an aid worker in 2003’ Beyond Borders. She also adopted a son, Maddox, from Cambodia.
In April 2004, Jolie began filming Mr. & Mrs. Smith, in which she and Brad Pitt played a married couple who are secretly both hired assassins. Rumors soon began flying about their off-screen romantic involvement, and only intensified after Pitt and his wife Jennifer Aniston announced their separation in January 2005. Two months after his divorce from Aniston was finalized, Pitt petitioned to adopt Maddox and Jolie’s daughter Zahara (adopted in June 2005 in Ethiopia). In January 2006, during a visit to the Dominican Republic, the now-official couple–dubbed “Brangelina” by the press–announced that Jolie was pregnant. Shiloh Nouvel Jolie-Pitt was born that May in Namibia. Jolie adopted another son, Pax Thien, from an orphanage in Vietnam in March 2007; she gave birth to twins, Knox Leon and Vivienne Marcheline, in France in July 2008.
Though her film career often seemed to take a backseat in the headlines to her globetrotting lifestyle and ever-expanding family (not to mention her romance with the equally photogenic Pitt), Jolie continued to work steadily in films, notably in the spy drama The Good Shepherd (2006) and A Mighty Heart (2007), in which she played Mariane Pearl, the wife of a Wall Street Journal reporter who was killed by terrorists in Pakistan in 2002. In 2008, she starred in the summer action filmWanted and the crime drama Changeling, directed by Clint Eastwood. 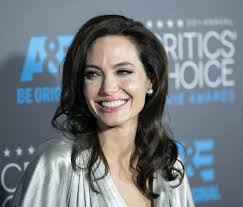 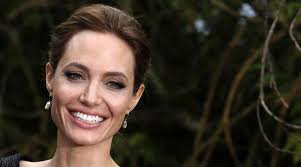