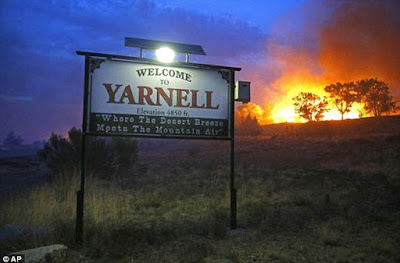 On this day in 2013, 19 firefighters perish while battling a wildfire near Yarnell, Arizona. All were members of the Granite Mountain Interagency Hotshot Crew, an elite group of wildland firefighters that was part of the Prescott (Arizona) Fire Department. It was the deadliest day for U.S. firefighters since the 9/11 terrorist attacks.


What became known as the Yarnell Hill Fire was ignited by a lightning strike at around 5:30 p.m. on June 28 near Yarnell, a former gold-mining town about 35 miles south of Prescott and 80 miles northwest of Phoenix. Two days later, on June 30, the blaze intensified and rapidly spread. That afternoon, the Granite Mountain Hotshots, who had been building a fire line (an area in which all vegetation has been removed to prevent a blaze from spreading) along a ridge top, headed down into a basin and were caught off guard when a sudden change in wind direction sent huge flames straight toward them. With nowhere to escape, the 19 members of the all-male crew deployed small emergency shelters shortly after 4:45 p.m. These shelters, last-ditch safety devices resembling sleeping bags covered in aluminum, can protect against heat but melt at extreme temperatures. The men deployed the shelters as they’d been trained, with the least experienced hotshots going first and the most experienced going last. However, the temperature of the fire reached more than 2,000 degrees, and the shelters only were designed to withstand up to 1,200 degrees.
The fallen firefighters were almost all in their 20s or 30s. The lone survivor of the 20-person Granite Mountain crew had been assigned to act as a lookout that day and wasn’t with his fellow hotshots when they were overtaken by the blaze.
The Yarnell Hill Fire finally was contained on July 10, after burning some 8,400 acres and destroying more than 100 structures. In September 2013, the Arizona State Forestry Division, which oversaw the firefighting efforts, released the results of an investigation that concluded there was no evidence of negligence or recklessness in the firefighters’ deaths. However, later that year, the Arizona Division of Occupational Safety and Health criticized the Forestry Division’s management of the Yarnell Hill fire-suppression operations and charged the agency with, among other things, prioritizing the protection of “non-defensible structures and pastureland” ahead of firefighter safety.