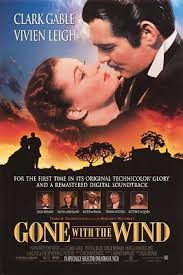 Gone with the Wind re-released in United States.

originally released in 1939, is re-released in U.S. theaters by New Line Pictures.
Produced by David O. Selznick and based on the mega-best-selling novel of the same name by Margaret Mitchell, Gone with the Wind made its splashy debut in Atlanta, Georgia, in December 1939. Beautiful British newcomer Vivien Leigh starred as the scheming Southern belle Scarlett O’Hara, who pines after her gentlemanly neighbor Ashley Wilkes (Leslie Howard) long after his marriage to

the impossibly kind and gracious Melanie (Olivia DeHavilland). One of Hollywood’s most beloved leading men, Clark Gable, played the roguish but ultimately good-hearted Rhett Butler, Scarlett’s ardent admirer (and possible soul mate), who rescues her from the fires of Atlanta and later becomes her third husband.

At the following year’s Oscar ceremony, Gone with the Wind collected eight Academy Awards, including Best Picture, Best Director (Victor Fleming), Best Actress (Leigh) and Best Adapted Screenplay. Hattie McDaniel, who played Scarlett’s bossy but loving Mammy, won in the Best Supporting Actress category, becoming the first African-American performer to receive an Oscar. In addition to its critical honors, the film grossed close to $200 million, making it one of the most profitable films of all time.
Though Gone with the Wind had always been a controversial blockbuster for its sympathetic portrayal of the antebellum South, its popularity endured over the next half-century, fueled by several theatrical re-releases. For its 1998 re-release, the nearly 60-year-old film was digitally restored and its sound was remastered. For the first time in decades, it was also shown in its original aspect ratio, instead of the wide-screen format favored with previous releases, which had at times resulted in characters’ heads appearing cut off. Also for the first time in more than 30 years, the film was processed in Technicolor, in which it was originally made.
Earlier in 1998, Gone with the Wind had placed fourth on the American Film Institute’s inaugural poll of the 100 best American films of all time, behind Citizen Kane, Casablanca and The Godfather. (In the 10th anniversary edition of that list, released in June 2008, it had dropped two spots, to No. 6.)