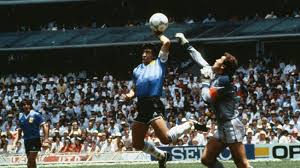 Hand of God helps out Maradona.

On this day in 1986, Argentine midfielder Diego Maradona scores two goals to lead Argentina past England and into the semifinals of the World Cup.


The game was watched the world over, as Argentina and England had not yet normalized relations after a war over the Malvina Islands, also known as the Falklands. On April 2, 1982, General Leopold Galtieri led the Argentine military 300 miles off the Argentine coast to the British-occupied Falkland Islands, which Argentines believed rightfully belonged to them. British Prime Minster Margaret Thatcher responded by sending 110 ships and 28,000 soldiers to the island. The ensuing two-month war left 907 people dead, most of them Argentines. Argentina surrendered on June 14.
Argentina fielded a more talented team in the 1986 World Cup than the English, and they were determined to defeat their rivals. The first goal Maradona scored has come to be known as the “Hand of God” goal, or “Mano de Dios.” The ball appeared to be hit into the goal off of Maradona’s head, but was in fact punched in with his left hand, a violation that the referees failed to call. When asked about the goal after the game, Maradona said the goal was scored “a little with the head of Maradona and a little with the hand of God.” Five minutes later, Maradona scored what was voted in 2002 to be the greatest goal in World Cup history, when he dribbled past five English defenders before scoring to give Argentina a 2-0 lead. Argentina went on to defeat West Germany 3-2 to win its second ever World Cup championship.
England and Argentina did not re-establish diplomatic relations until 1990. In 2005, admitting he had committed a hand ball, Maradona said on his television show La Noche Del Diez, “Whoever robs a thief gets a 100-year pardon.” 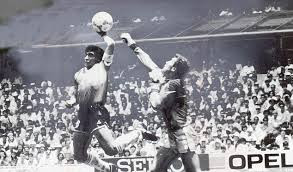 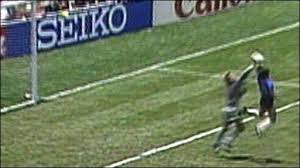