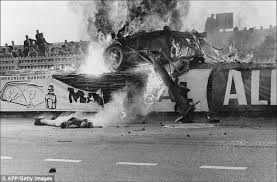 On this day in 1955, a racing car in Le Mans, France, goes out of control and crashes into stands filled with spectators, killing 82 people. The tragedy in the famous 24-hour race leads to a ban on racing in several nations.
The Le Mans race, organized by France’s Automobile Club de L’Ouest, was first held in May 1923 and has since been held nearly every June. The race always begins at 4 p.m. on Saturday afternoon and lasts for the next 24 hours over a 13-kilometer course running through the country roads near Le Mans. The winner is the racer who covers the greatest distance in that time. Before 1970, each car could only have two drivers. Only a single driver was allowed in the early years of the race. Three are required today.


In 1952, Pierre Levegh, a Frenchman driving alone, might have won the race if not for a single mistake in the last hour. Three years later, Levegh was invited to join the Mercedes-Benz team; their 300SLR was to be outfitted with a new innovation, an air brake that would enhance cornering.
Prior to the race, Levegh complained that the course was too narrow near the pit-stop area and the grandstand. This observation proved prescient. As Levegh was racing for the lead near the pit-stop area, he swerved to avoid fellow racer Mike Hawthorn’s Jaguar as it moved toward the pits. Levegh’s car, going about 150 miles per hour, came up too fast on Lance Macklin’s Austin-Healey and was catapulted upward. The car crashed into the grandstand and its exploding parts went straight into the crowd. Levegh and more than 80 spectators, packed into the grandstand, lost their lives in the fiery crash.
The race continued despite the horrific accident (Hawthorn won), purportedly because if the remaining spectators had left the area, they would have blocked the ambulances called to pick up the dead and injured. The rest of the Mercedes team was recalled.
Grand Prix races in Germany and Switzerland scheduled for later that year were cancelled, and a complete ban on racing in Switzerland remains to this day. Both Spain and Mexico also temporarily banned motor racing following the 1955 Le Mans tragedy. 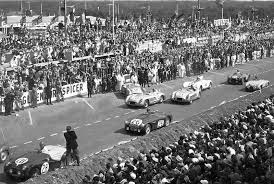