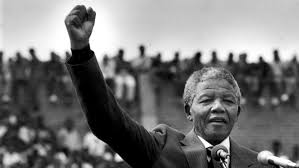 In South Africa, the African National Congress (ANC) makes public a statement by Nelson Mandela, the long imprisoned leader of the anti-apartheid movement. The message, smuggled out of Robben Island prison under great risk, read, “UNITE! MOBILISE! FIGHT ON! BETWEEN THE ANVIL OF UNITED MASS ACTION AND THE HAMMER OF THE ARMED STRUGGLE WE SHALL CRUSH APARTHEID!”
Mandela, born in 1918, was the son of the chief of the Xhosa-speaking Tembu people. Instead of succeeding his father as chief, Mandela went to university and became a lawyer. In 1944, he joined the ANC, a black political organization dedicated to winning rights for the black majority in white-ruled South Africa. In 1948, the racist National Party came to power, and apartheid–South Africa’s institutionalized system of white supremacy and racial segregation–became official government policy. With the loss of black rights under apartheid, black enrollment in the ANC rapidly grew. Mandela became one of the ANC’s leaders and in 1952 was made deputy national president of the ANC. He organized nonviolent strikes, boycotts, marches, and other acts of civil disobedience.
After the massacre of peaceful black demonstrators at Sharpeville in 1960, Mandela helped organize a paramilitary branch of the ANC to engage in acts of sabotage against the white minority government. He was tried for and acquitted of treason in 1961 but in 1962 was arrested again for illegally leaving the country. Convicted and sentenced to five years at Robben Island Prison, he was put on trial again in 1963 with seven other ANC members who were arrested at Rivonia in possession of a store of weapons. Charged with sabotage, treason, and violent conspiracy, Mandela admitted to many of the charges against him and eloquently defended his militant activities during the trial. On June 12, 1964, he was sentenced to life imprisonment.

Mandela spent the first 18 of his 27 years in jail at the brutal Robben Island Prison. He was confined to a small cell without a bed or plumbing and was forced to do hard labor in a quarry. Once a year, he was allowed to meet with a visitor for 30 minutes, and once every six months he could write and receive a letter. At first, he was only allowed to exchange letters with his family, and these letters were read and censored by prison officials. Later he was allowed to write to friends and associates, but any writing of a political nature was forbidden. With the help of fellow prisoners and his visitors, Mandela smuggled out statements and letters to spark the continuing anti-apartheid movement. A 500-page autobiography, manually miniaturized into 50 pages, was smuggled out by a departing prisoner in 1976. The original manuscript of the autobiography, buried in a garden, was discovered by the prison warden soon after. As punishment, Mandela and three others lost their study rights for four years.
Through it all, Mandela’s resolve remained unbroken, and he led a movement of civil disobedience at the prison that coerced South African officials into drastically improving conditions on Robben Island. In 1982, he was moved to Pollsmoor Prison on the mainland, and in 1988 to a cottage, where he lived under house arrest.
In 1989, F.W. de Klerk became South African president and set about dismantling apartheid. De Klerk lifted the ban on the ANC, suspended executions, and on February 11, 1990, ordered the release of Nelson Mandela after 27 years as a political prisoner. Mandela subsequently led the ANC in its negotiations with the minority government for an end to apartheid and the establishment of a multiracial government. In 1993, Mandela and de Klerk were jointly awarded the Nobel Peace Prize. On April 26, 1994, more than 22 million South Africans turned out to cast ballots in the country’s first-ever multiracial parliamentary elections. An overwhelming majority chose Mandela and the ANC to lead the country, and a “national unity” coalition was formed with de Klerk’s National Party and the Zulus’ Inkatha Freedom Party. On May 10, Mandela was sworn in as the first black president of South Africa.
As president, Mandela established the Truth and Reconciliation Commission to investigate human rights violations under apartheid and introduced numerous initiatives designed to improve the living standards of South Africa’s black population. In 1996, he presided over the enactment of a new South African constitution. Mandela retired from politics in June 1999 at the age of 80. He was succeeded as president by Thabo Mbeki of the ANC. Mandela, admired by people around the world, continued to advocate for human rights and peace until his death in December 2013. 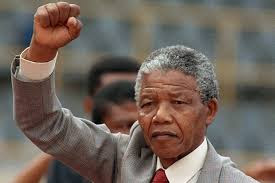