Today In History: May 7th. 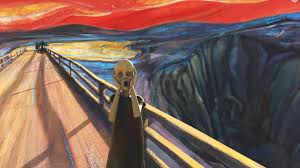 On May 7, 1994, Norway’s most famous painting, “The Scream” by Edvard Munch, was recovered almost three months after it was stolen from a museum in Oslo. Thefragile painting was recovered undamaged at a hotel in Asgardstrand, about 40 miles south of Oslo, police said.

The iconic 1893 painting of a waiflike figure on a bridge was stolen in only 50 seconds during a break-in on February 12, the opening day of the 1994 Winter Olympics in Lillehammer. Two thieves broke through a window of the National Gallery, cut a wire holding the painting to the wall and left a note reading “Thousand thanks for the bad security!”
A few days after the theft, a Norwegian anti-abortion group said it could have the painting returned if Norwegian television showed an anti-abortion film. The claim turned out to be false. The government also received a $1 million ransom demand on March 3, but refused to pay it due to a lack of proof that the demand was genuine.
Eventually, police found four pieces of the painting’s frame in Nittedal, a suburb north of Oslo, and what may have been a cryptic messages that the thieves wanted to discuss a ransom. Finally, in January 1996, four men were convicted and sentenced in connection with the theft. Theyincluded Paal Enger, who had been convicted in 1988 of stealing Munch’s “The Vampire” in Oslo. Enger was sentenced this time to six-and-a-half-years in prison. He escaped while on a field trip in 1999, andwas captured 12 days later in a blond wig and dark sunglasses trying to buy a train ticket to Copenhagen.
In August 2004, another version of “The Scream” was stolen along with Munch’s “The Madonna,” this time from the Munch Museum in Oslo. Three men were convicted in connection with that theft in May 2006. Police recovered both works in August with minor marks and tears. Yet another version of “The Scream” remained in private hands and sold on May 2, 2012, for $119.9 million, becoming the most expensive work of art to sell at auction.
Munch developed an emotionally charged style that served as an important forerunner of the 20th century Expressionist movement. He painted “The Scream” as part of his “Frieze of Life” series, in which sickness, death, fear, love and melancholy are central themes. He died in January 1944 at the age of 81. 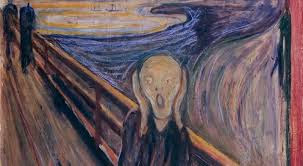