Today In History: May 17th. 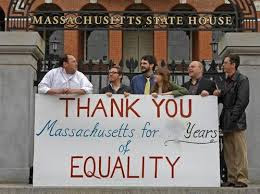 Marcia Kadish, 56, and Tanya McCloskey, 52, of Malden, Massachusetts, marry at Cambridge City Hall in Massachusetts, becoming the first legally married same-sex partners in the United States. Over the course of the day, 77 other same-sex couples tied the knot across the state, and hundreds more applied for marriage licenses. The day was characterized by much celebration and only a few of the expected protests materialized.
On November 18, 2003, the Massachusetts Supreme Court found the state’s ban on same-sex marriage unconstitutional, ruling that the state could not deny the protections, benefits and obligations conferred by civil marriage to two individuals of the same sex who wish to marry. The decision cited the state constitution’s ban on the creation of second-class citizens. The court then gave the state 180 days in which to change the law. Efforts by some legislators to introduce an amendment to the state’s constitution banning same-sex marriage, but recognizing civil unions, were defeated.
As of late 2005, Massachusetts remained the only state to recognize same-sex marriage. California, Connecticut, Washington, D.C., Hawaii, Vermont, Maine, and New Jersey recognize same-sex civil unions, giving partners similar legal rights to those enjoyed by married couples within their states. The couples do not have legal rights on a federal level or within states that do not recognize civil unions. Sixteen states have constitutional amendments that explicitly make same-sex marriage illegal. Twenty-seven states legally define marriage as the union of two people of opposite sexes.
Some national politicians, including President George W. Bush, have publicly broached the idea of a national constitutional amendment defining marriage as the union of a man and woman. Other groups, such as the Roman Catholic Church, the Church of Jesus Christ of Latter-day Saints, and the Christian Coalition, as well as many Republicans in Congress, continue to oppose same-sex marriage. 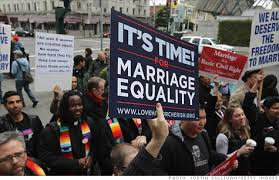