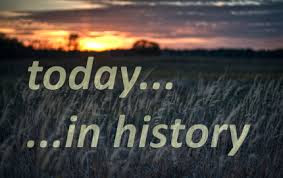 Universe is Created According To Kepler.

On this day in 4977 B.C., the universe is created, according to German mathematician and astronomer Johannes Kepler, considered a founder of modern science. Kepler is best known for his theories explaining the motion of planets.

Kepler was born on December 27, 1571, in Weil der Stadt, Germany. As a university student, he studied the Polish astronomer Nicolaus Copernicus’ theories of planetary ordering. Copernicus (1473-1543) believed that the sun, not the earth, was the center of the solar system, a theory that contradicted the prevailing view of the era that the sun revolved around the earth.
In 1600, Kepler went to Prague to work for Danish astronomer Tycho Brahe, the imperial mathematician to Rudolf II, emperor of the Holy Roman Empire. Kepler’s main project was to investigate the orbit of Mars. When Brahe died the following year, Kepler took over his job and inherited Brahe’s extensive collection of astronomy data, which had been painstakingly observed by the naked eye. Over the next decade, Kepler learned about the work of Italian physicist and astronomer Galileo Galilei (1564-1642), who had invented a telescope with which he discovered lunar mountains and craters, the largest four satellites of Jupiter and the phases of Venus, among other things. Kepler corresponded with Galileo and eventually obtained a telescope of his own and improved upon the design. In 1609, Kepler published the first two of his three laws of planetary motion, which held that planets move around the sun in ellipses, not circles (as had been widely believed up to that time), and that planets speed up as they approach the sun and slow down as they move away. In 1619, he produced his third law, which used mathematic principles to relate the time a planet takes to orbit the sun to the average distance of the planet from the sun.
Kepler’s research was slow to gain widespread traction during his lifetime, but it later served as a key influence on the English mathematician Sir Isaac Newton (1643-1727) and his law of gravitational force. Additionally, Kepler did important work in the fields of optics, including demonstrating how the human eye works, and math. He died on November 15, 1630, in Regensberg, Germany. As for Kepler’s calculation about the universe’s birthday, scientists in the 20th century developed the Big Bang theory, which showed that his calculations were off by about 13.7 billion years.