Make Or Mar In North London!


This is the type of game that separates Contenders from Pretenders, Men from Boys. The North London derby between the Arsenal and Spurs has taken a more important outlook and dimension because the EPL title is on the Line here and up for whoever has the Capacity and Capability to go for it. On the last matchday Spurs lost 1-0 to the impressive WestHam side at Upton Park a difficult ground to play football anyway losing the chance to go top of the EPL table with 9 games to go after league pacesetters had earlier managed a 2-2 draw with Norwich city. On the other hand Arsenal were disappointing and dismal in their 1-2 loss to Swansea going 6 points being Leicester in the challenge for the EPL. However with both teams set to square off in the derby there is a whole lot at than just the EPL title at stake. A loss for the gunners coupled with a Leicester win would set them back as far as 9 points behind with 8 games to go and to add insult to injury Spurs their fierce and bitter rivals could be closer to an EPL title in 50 years.

For Arsene Wenger, this is his boom time. If Arsenal falls again at this stage then perhaps it is time for him to go. Because there will not be excuses to be made up by him and those sympathetic to him. So this could perhaps be one of the most important North London derbies in his Arsenal managerial career, and with Arsenal's Poor form, there is serious trepidation in the red part of North London.

Defeat on Saturday would leave Arsenal six points behind Tottenham and extend the club’s dismal run of form to four defeats in a row in all competitions.Tottenham look fitter, hungrier, better organised, more focused, more together - the list could go on. In a season in which Manchester United, Chelsea, Liverpool and Manchester City have all struggled enormously, Wenger has no excuses if his side fail to take this golden opportunity.The door has been opened for Arsenal and if they allow it slam in their faces, then Wenger must step aside. If he cannot win the league this season, he never will again.

For Mauricio Pochettino and Spurs they have the chance of going better than previous squads and also have the chance of banishing or perhaps handing over the Choke Mantra to the Gunners. Spurs are in good form except for the blip against West Ham and they believe this is their year, but for it to come true they must first do away with the Gunners by beating them and going closer to the EPL summit. The ball is their "Court" to prove that the tide is changing from the Red part of North London to the White and Black side.All In all, this could be one of the most interesting and important North London derbies to both Managers, Teams and fans.

However the Jury is out on both Teams and Managers with more spotlight being focused on Arsene Wenger.
This is a Potential Title decider, who will come out victorious. Is it time for the Spurs or will Arsenal Choke them as usual.
12:45 GMT is the time! 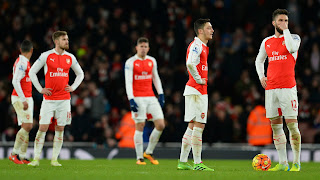 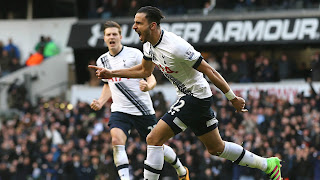