What Is A Moral Code.

Moral code is conformity, or degree of conformity to conventional standards of moral conduct. A moral code is that by which all decent people live by, it is that which is acceptable to society. It can also be a principle of wrong or conforming to standards of behavior and character based on wrongful principles.
Morals as defined as Socrates is "how we ought to live". Furthermore it can be explained as standards/ laws or rules within a group of society. A moral code is a set of standards, laws of rules that we hold ourselves to, whether they be based on affiliations, events that have happened in our life, or just from the world around us. Often people derive their moral code from bits and pieces of all of these.
Moral codes do not specifically have to be accepted by society as a whole, merely they have to be accepted by the society with which you associate or the group you affiliate with. The best moral code are constantly being re-evaluated and evolving, just as the best people are constantly growing. Moral code is a series of agreements to which a person has subscribed to guarantee the survival of a group.
However, in this competitive society, I feel that it is not uncommon that some people sacrificed their moral values for one’s benefit, for example, lying in order to protect one’s interests. The foundation of a society where people value themselves beyond the good of the society would be weak. When one is only concerned about oneself and not the good of the society as a whole, one would only do things that benefit oneself and disregard the society. It would ultimately harm the society if people become self-centered. This is due to the fact that usually the good of the society would mean the good of each and every individual in the society. However, as this group of people is blinded by their self-centeredness, they would be unable to see that and become only interested of the short-term gains. Therefore, it is crucial to establish a strong moral foundation in the society.
I feel that moral education must begin when the child is young, as it takes time for the child to internalize it. Both families and schools should be responsible in bringing up children with moral values. There has been over emphasis on academic subjects and neglected moral education as a result. Parents are the first teachers that children encounter and emulate, therefore parents have to set a good example for them. In schools, teachers can come up with interesting ways to impart moral values and life skills to students.
As long as the right moral values and codes are taught and inculcated into people especially at young age, the quality of the individual would be at optimum and the society would be better for it. 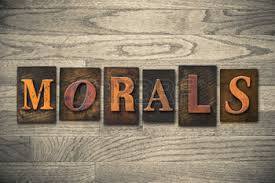