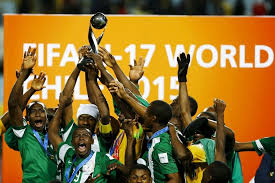 Has it ever occured to you to think or ask how and why Nigeria performs Fantastic, Super and Great at age grade competitions but can not reproduce or replenish the same feat at senior tournaments and competitions. I mean if an U-17 team beats and blows away the world at an U-17 world cup tournament with players that are supposed to be "17 and below", why can they not perform that same feat two years later at an U-20 world cup or why do they go into "extinction" a few years down the line. Typical example of this is the Nigerian U-17 team coached by the Late Yemi Tella that won the junior world cup in 2007, I can not pick out any player that plays for a good/decent team in the top five European leagues. Chrisantus Macaulay was the highest goal scorer and best player of the tournament beating of Toni Kroos for the award, but where is Chrisantus Macaulay? But we know that Kroos plays for Real Madrid after playing for Bayern Leverkusen and Bayern Munich, and also winning almost everything in world football, a fulfilled potential certainly. Nigeria has won the U-17 world cup for a record four times, good record right. But we all know the aim of age grade competitions is for growth, development and progression of the young stars. Sadly the head, managers and authorities in charge of football do not take growth, progress and development serious. It is high time we forgo the mentality of win at all competitions and at all cost and think of bringing up a development plan that will pay off in the nearest future. After all, the super powers of world football have a working development plan which is working and produces result for them, the likes if Germany, Spain, Argentina etc. We must know that the discovery and progression of about five to ten players from junior tournaments like U-17 and U-20 to our senior sides is better than winning the junior tournament itself. Afterall everybody is happy for a certain Kelechi Ihenacho, with the right mentality and development plan a lot of Kelechi Ihenachos can be discovered. Age cheating must be discontinued for us to be able to attain the heights we desire, because I believe we have the capacities and capabilities to reach those heights. Afterall is it not disappointing that a country with the abundance of talents at our disposal has not reached the quarter final of the senior world cup, and this will continue to happen when we take "men" to play a competition meant for boys, and by the time the "men" are supposed to progress to a higher level they would be found missing, wanting and incapable. We must move away from the cheating and win at all cost mentality, and copy or take a cue from the successful blue print and development plans that has worked for the Europeans in order to excel to greater heights, we must invest more in potentials than already made people or persons because they are the future.